CHAPTER 10: How Vigils is to Be Said During the Summer

From Easter until November, let the whole psalmody be sung just as we described it in the previous chapter.  However, because the summer nights are shorter the readings from the book should be omitted.  Instead, let one reading from the Old Testament be said from memory. Let a short response follow this, and let all the rest be performed as described earlier; namely, that never fewer than twelve psalms be said at the night office.

In this chapter, we see again how Saint Benedict is willing to make concessions to human weakness.  The summer nights are short.  The monks will need their sleep.  And even if they are the “Spiritual Special Forces of the Church,” still no good can come of mistreating the body.  Our lives need to be suited to prayer, but without a certain amount of rest, comfort, and nourishment (and I might add beauty), real contemplative prayer is impossible.  As much as Benedict loves the liturgy, he agrees to cut it short for the sake of our health.
There is, of course, a larger issue at stake here as well.  Human beings have a tendency to go to extremes, especially when we get excited about something.  In the spiritual life, this can be especially dangerous because so much more is at stake, and if the Devil can’t get us to do the wrong thing, he’ll try to get us to do the right thing in the wrong way.  In monk circles, we call this “the fervor of novices”—that tendency of rookies to want to do everything straight away.  I have a similar problem with my rugby players.  They always want to scrimmage on the first day of practice.  But until you have learned to tackle correctly, it’s downright dangerous to play the game.  And this holds true for prayer as well.
The day I entered Saint Louis Abbey as a postulant, I swore to myself that I would never again have a lustful thought. That resolution lasted all of fifteen minutes, so I decided to postpone it until my novitiate.  When that time came, however, I found that I was still bothered by the same lustful thoughts.  I had been reading a biography of Saint Francis of Assisi, and I came across a passage that said when he had lustful thoughts, he used to go roll around in a rose bush; so I said to myself, if Saint Francis can do it, so can I.  And I went out into the garden behind the monastery and jumped into one of our rose bushes.
Unfortunately, I had failed to take into account three important differences between Saint Francis 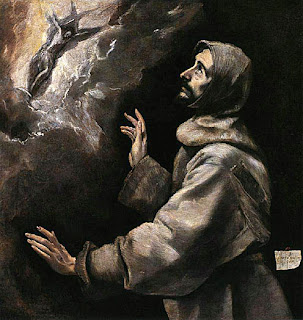 and me:  First, that Saint Francis jumped into a wild rose bush, which has considerably smaller thorns than the cultivated variety; second, that Saint Francis was naked when he did it, so he didn’t get his clothes tangled up; and third, that Saint Francis was a saint.  Rolling around in a rose bush might be a good thing for a saint to do, but for the rest of us, it’s kind of stupid.
To make a long story short, I got stuck in that rose bush and spent a very uncomfortable hour and a half trying to get out—then another awkward twenty minutes or so trying to explain myself to the monk that found me there.  Once my novicemaster had finished laughing at me, he explained to me about the fervor of novices and added that in the future, I would do well to check with him before attempting any further feats of asceticism.  Of course, I ignored that advice as well, and wound up giving myself ulcers by fasting too much.  But that’s another story.
What I learned from this particular humiliation was that prayer, like any human endeavor, requires practice and moderation.  It also requires a certain amount of discipline, and if you really want to make progress and avoid hurting yourself, you do well to find a spiritual director—someone old and wise enough to let you know when you’re selling yourself short, or just as importantly, when you’ve gone too far.
Posted by Fr J Augustine Wetta, OSB at 2:46 PM