The first step toward humility is obedience without delay…A humble monk will instantly quit his own work and giving up his own will and leaving unfinished whatever he was doing, set about what he is told with the ready step of obedience,.  This obedience, however, will be acceptable to God and agreeable to men only if what is commanded is done without hesitation, delay, lukewarmness, grumbling or complaint.

Obedience is an unpopular virtue.  No one likes to be told what to do, and these days more so than in past ages, people like to do their own thing.  “I did it MYYY WAAAAY,” sang Frank Sinatra.  (Three failed marriages, an alcohol addiction, and at least one illegitimate child later, one might justifiably ask whether his way was really the wisest, but that’s between him and God.)  My point is that when you insist on doing everything your way, what usually happens is that you repeat someone else’s mistakes.  Frankly, every angst-ridden adolescent in the world rebels against his parents.7  If you want to be revolutionary and unique, try obeying them.  Try following THE Way and not just your way.  But again, this requires humility.  It requires that you admit there is someone in the world older, wiser, or smarter than yourself.  For a Catholic, that someone is Holy Mother Church (more on humility in Chapter 7).
The purest and most gracious example of obedience is, of course, Our Lady.  The most startling aspect of her personality is her complete obedience to Divine Providence.  When she said that earth-shattering “yes” to God’s angel, she couldn’t possibly have known how gloriously her own story would end—or how much pain she would have to endure getting there.  In fact, as scholars and exegetes are quick to point out, she had every reason to believe that her life would be short and tragic.  Yet she responded to God’s invitation with heroic obedience.  Dom Paul Delatte, in his great commentary on the Rule of Saint Benedict, calls this obedience “supernatural docility.”   “This same docility,” he writes, “is what gives our monastic life its authentic character.”
Now “docile” is not a adjective I would easily, enthusiastically, or even very accurately ascribe to myself or to many of the people I like. To the modern ear, it sounds anything but heroic.  Can you imagine, for example, Superman being described as “docile”?  Or the Incredible Hulk?  Or George Washington?  Or Rambo?  Yet, in the presence of God’s will, what are the alternatives?   Saint Bernard, in his famous sermon on the Annunciation, reflected in the most vivid terms, on that moment between Gabriel’s message and Our Lady’s answer—when the whole Cosmos held its breath, all the angels stopped what they were doing, and all the demons cringed in anticipation of Mary’s “Yes.”
“Let it be done to me as you have said” is really much more than a “yes” because it submits to a complete unknown. So often, we find ourselves saying: “If I only knew God’s will, I would do it.”  Well, sure.  Who wouldn’t?  The point is to accept God’s will without knowing it.  To sign our lives onto a blank check.  That is what is meant by Christian obedience. 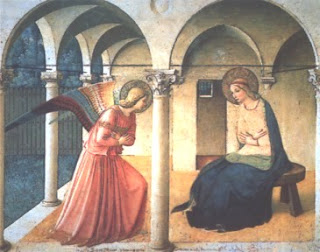 “Let it be done to me as you have said.”
One would think that, in light of a decision of such magnitude, Mary might have stopped to consider all the options and insisted on making an informed decision, but unlike most of us, she simply gave herself over:  “I am the handmaid of the Lord.  Let it be done to me as you have said.”  Her response doesn’t expect a reward—couldn’t possibly have foreseen it.  Yet we read in the book of Revelation that she is clothed in the sun and crowned with stars.  God literally gives her the moon.  He will not be outdone in generosity.
Writes Saint John of the Cross, “Drink of the Chalice of Jesus.  Close your eyes and do not seek to know what it may contain.  It is enough to know that Jesus offers it.”
Posted by Fr J Augustine Wetta, OSB at 1:45 PM

Email ThisBlogThis!Share to TwitterShare to FacebookShare to Pinterest
Labels: Obedience