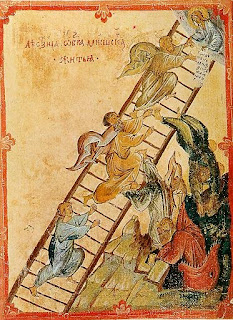 Brothers, the Holy Scripture cries to us saying: "Every one that exalts himself shall be humbled; and he that humbles himself shall be exalted" (Lk 14:11; 18:14). Therefore, brothers, if we wish to reach the greatest height of humility, then we must build the ladder which appeared to Jacob in his dream, by means of which angels were shown to him ascending and descending (cf Gen 28:12).

People often ask me, “What is your secret?  How is it that you can be so incredibly humble?” [1]
Blushingly, I point out that my secret can be found in Chapter 7 of Saint Benedict’s Rule.  In this chapter, our holy father outlines a twelve-step, fool-proof, crash course in pride loss.
That’s right!  Twelve easy steps!  No dieting, no strenuous workouts, just follow these twelve simple steps and watch your pride melt away!  Here it is, free of charge, for a limited time only:

Step 1. The first degree of humility, then, is that a man always have the fear of God before his eyes (Psalm 35[36]:2), shunning all thoughtlessness so that he is constantly aware of all that God has commanded.
Sure, it’s better to love God, but when you’re not feeling the love, at least feel the fear.  “Keep in mind,” says Saint Benedict, “that all who despise God will burn in hell for their sins.”

Step 2. The second degree of humility is, when a man does not love his own will, nor is pleased to fulfill his own desires but by his deeds puts into practice that word of the Lord which says: "I came not to do My own will but the will of Him that sent Me" (Jn 6:38).
Don’t be in love with your own will.  In fact, on a regular basis, deny yourself something—just to show your will that you’re in charge.

Step 3. The third degree of humility is that, for the love of God, a man subjects himself to a Superior in all obedience, imitating the Lord, of whom the Apostle says: "He was obedient even unto death" (Phil 2:8)
Obey your parents.  If you become a monk, obey your abbot, if you get married, obey your spouse.  There’s always someone who deserves your obedience.  And all of us obey the teachings of the Church.

Step 4. The fourth degree of humility is, that, if difficult things are commanded, in fact, even if injuries are inflicted, he accepts them with patience and self-restraint.  He never gets tired or gives up but keeps at it, as the Scripture says: "He that shall persevere unto the end shall be saved" (Mt 10:22).
Embrace suffering when it comes your way.  Don’t go looking for it, but if you have to suffer, remember that Jesus suffered, and that this is an opportunity to suffer with him.  In so doing, you will help redeem the world.

Step 5. The fifth degree of humility is that one should never hide from his Abbot any of the evil thoughts which rise in his heart or the evils committed by him in secret.  Instead, he should confess them.  Concerning this the Scripture urges us, saying: "Reveal your way to the Lord and trust in Him" (Ps 36[37]:5).
Go to confession.  And when you do, try to think of that one thing you REALLY don’t want to mention—then mention it.

Step 6. The sixth degree of humility is that a monk should be content with the lowliest and worst of everything, and in all that is demanded him, considers himself an unworthy workman, saying with the Prophet: "I am stupid and I never get it right; I have become like a dumb animal in your presence, and yet, I am always with You" (Ps 72[73]:22-23).
Be content when you’re treated badly.  Remember that if someone insults you, there must be some level on which you had it coming.  And what’s more, every insult is an opportunity to practice humbling yourself.

Step 7. The seventh degree of humility is that not only with his tongue he declares, but also in his inmost soul he believes that he is the lowest and most useless of men, humbling himself and saying with the Prophet: "But I am a worm and no man, scorned by everyone—an outcast" (Ps 21[22]:7).
Remember that there is something you’re bad at.  No one is good at everything, and everyone is good at something.

Step 8. The eighth degree of humility is that a monk does nothing but what is authorized by the rule of the monastery and the example of his elders.
Do what you’re told when your told it.  Or better yet, watch the people you respect, and imitate them.

Step 9. The ninth degree of humility is that a monk should hold his tongue from speaking, and keeps silence until he is asked; for Scripture shows that "in a multitude of words sin is always present" (Prov 10:19).
Learn to love silence.  As the saying goes, it’s better to remain silent and be thought a fool, than to open your mouth and remove all doubt.

Step 10. The tenth degree of humility is that a monk should not laugh easily or quickly, for it is written: "The fool lifts his voice in laughter" (Sir 21:23).
Be careful what you laugh at.  The funniest jokes are almost always cruel.

Step 11. The eleventh degree of humility is that when a monk speaks, he should speak gently and without laughter, humbly and with solemnity, with few and sensible words, and that he not speak with a loud voice, as it is written: "The wise man is known by his few words."
When you do speak, speak gently.

Step 12. The twelfth degree of humility is that a monk should not only be humble in his heart, but also should appear so to all that see him; namely, at the Work of God, in the garden, on a journey, in the field, or wherever he may be, sitting, walking, or standing, let him always have his head bowed down, his eyes fixed on the ground, saying to himself in his heart what the publican in the Gospel said: "Lord, I am a sinner and not worthy to lift up my eyes to heaven" (Lk 18:13)
Be mindful of what you’re looking at.  King David had to learn this lesson the hard way.

In this manner, says Saint Benedict, having ascended all these steps of humility, you will arrive at that perfect love of God which casts out fear.  Having sown that tiny mustard seed of humility, the Kingdom of Heaven will spring up in your soul and become a great tree.