Let us do what the Prophet says: "I will be careful of my ways; and so that I do not sin with my tongue, I have set a guard to my mouth, and kept silence even from good things" (Ps 38:2-3).  Here the prophet shows that, if at times we ought to refrain from useful speech for the sake of silence, how much more ought we to avoid evil words on account of the punishment due to sin.  Therefore, because of the importance of silence, let permission to speak rarely be given to perfect disciples even for good and holy and edifying reasons.
Fr. Timothy Horner is the oldest monk at our monastery.  He’s six foot two, with a patch of red hair sprouting from his head like a moss.  He’s been all around the world, has a degree in Classics from Oxford, he served with the British Special Forces in India during World War II, and he is one of the founding monks of our monastery.  He is the direct descendent of “Little” Jack Horner (remember the nursery rhyme?) and he is the most noble man I have ever met.  I have never heard Fr. Timothy raise his voice, I have never heard him use more words than were necessary, and I have never seen him visibly upset by anything.
As part of my novitiate, I took a class from him on The Rule of Saint Benedict (which he himself translated).  Fr. Timothy was always early for these classes, and more often than not, I was late—huffing and puffing, pages of notebook paper flying—and a ready excuse on the tip of my tongue.  But on one occasion, Fr. Timothy was late for class and I was early.  I made sure all my notes and books were in order, and was rehearsing a rebuke for him when he walked into the novitiate. But he never gave me the chance to rub it in.  He made no excuses, no apologies, nor did he say anything at all as he calmly sauntered into the room, laid his books on the table, and placed a small white piece of paper in my hand.  On it were written these words:  “God’s first language is silence: everything else is translation.” 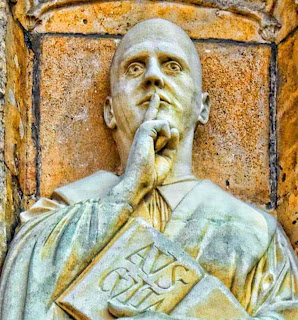 The first thing you will notice if you ever visit our monastery (or any other for that matter) is how quiet it can be.  And the silence itself can be a bit of a shock, especially if you’re young.  Yet silence is so very important.  The great composer, Claude Debussy once said, “Music is the silence between the notes.”  Isn’t it a shame that we live in a society that so fears silence!  We turn the radios on in our rooms, the TVs on in our dens, the stereos on in our cars...and when we’re not near any of these places, we plug ipods into our ears—anything to avoid silence.  Yet silence itself is the language of God!
I’ll let you in on something I just recently learned myself: set aside a few minutes each day to just to be quiet, and you will find that you instantly become a more peaceful person.  Turn off the TV and the radio.  Try not even to think about anything.  Make yourself empty for a few minutes and see what happens.  “We need to find God,” said Mother Theresa, “and He cannot be found in noise and restlessness. God is the friend of silence. See how nature—trees, flowers, grass—grows in silence; see the stars, the moon and the sun, how they move in silence... We need silence to be able to touch souls.”
Posted by Fr J Augustine Wetta, OSB at 7:53 AM