CHAPTER 11: How the Office of Vigils is to be Said on Sundays

The monks should wake up even earlier for the night office on Sunday.  And this should be done the same way in all seasons.  After the usual lessons and psalms, three canticles should be chanted with Alleluia; once the Abbot has given his blessing, four passages from the New Testament should be read, followed by the Te Deum.  Then the abbot should read a lesson from the Gospel, while the rest of the community stands in fear and trembling.
If—God forbid—the brethren should rise too late, some of the lessons or the responses may have to be shortened. But try to be sure that this never happens. If it does, let the monk responsible make due satisfaction to God in the oratory.

Saint Benedict only foresees one occasion when the monks should cut short the Sunday prayer: when, by some accident, they fail to wake up on time.  And whoever is at fault needs to make an apology to everyone in church—including God.  Prayer, you see, is fundamentally an act of justice.  We owe God our prayer.  It’s not something we do for ourselves (though of course there’s a lot to be gained), and it certainly isn’t a favor we do for God (though of course it pleases Him).  When we neglect our prayers, we are actually cheating God out of something that is His due.  Truly, Jesus has a right to a personal encounter with each of us.  And the privileged time and place for that is Sunday at church. 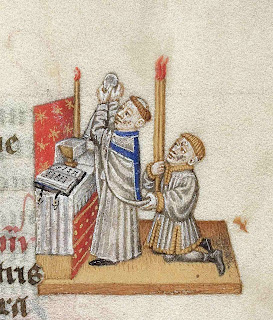 Obedience, however, shouldn’t be our only motive for going to mass on Sunday.  Our true reason for being there is gratitude.  The Eucharist is God’s gift to us, and the church is the most powerful locus of prayer at our disposal.  In fact, those who really understand this make a point of going to church more than once a week.  They realize that, since humans are built for prayer, the more we pray, the more powerfully human we become.  Moreover, when we pray together in Christ, we are ‘no longer strangers and guests, but fellow citizens with God's people and members of God's household, built on the foundation of the apostles and prophets, with Christ Jesus Himself as the capstone.” (Ephesians 2:19)
When Saint Benedict reflects on how his monks should say their Sunday prayers, he uses this unusual phrase: cum honore et tremor—“with honor and trembling.”  Benedict wants his monks to feel the importance of the Sabbath.  Sure, we’re obliged to be there on pain of our immortal souls, but more importantly, we are privileged to be there.  We are honored to be there, and we tremble at the magnitude of that honor.  Of course, that’s hard to do when you’re sleepy or the music doesn’t suit your taste or the congregation is obnoxious and lukewarm.  At times like these, we have to try to see with the eyes of faith.  Whenever I want to get psyched up about going to mass, I reread this quote from the Anglican monk, Gregory Dix:
“For century after century, spreading slowly to every continent and country and among every race on earth, this action has been done, in every conceivable human circumstance, for every conceivable human need from infancy and before it to extreme old age and after it, from the pinnacle of earthly greatness to the refuge of fugitives in the caves and dens of the earth. Men have found no better thing than this to do for kings at their crowning and for criminals going to the scaffold; for armies in triumph or for a bride and bridegroom in a little country church; for the proclamation of a dogma or for a good crop of wheat; for the wisdom of the government of a mighty nation or for a sick old woman afraid to die; for a schoolboy sitting an examination or for Columbus setting out to discover America; for the famine of whole provinces or for the soul of a dead lover; in thankfulness because my father did not die of pneumonia; for a village headman much tempted to return to superstition because the yams had failed; because the Turk was at the gates of Vienna…for the settlement of a strike; for a son for a barren woman; for Captain so-and-so wounded and prisoner of war; while the lions roared in the nearby amphitheatre; on the beach at Dunkirk; while the hiss of scythes in the thick June grass came faintly through the windows of the church; tremulously, by an old monk on the fiftieth anniversary of his vows; furtively, by an exiled bishop who had hewn timber all day in a prison camp near Murmansk; gorgeously, for the canonisation of S. Joan of Arc—one could fill many pages with the reasons why men have done this, and not tell a hundredth part of them. And best of all, week by week and month by month, on a hundred thousand successive Sundays, faithfully, unfailingly, across all the parishes of Christendom, the pastors have done this just to make the plebs sancta Dei—the holy common people of God" (The Shape of the Liturgy, p.744).
Is that awesome or what?
Posted by Fr J Augustine Wetta, OSB at 1:37 PM