CHAPTER 12: Concerning the Office of Lauds

Let Psalm 66 be said without an antiphon, drawing it out a little, that all may arrive for Psalm 50, which is to be said with an Alleluia. After this let two other psalms be said according to custom.  Then let the psalms of praise follow; then one lesson from the Apostle, the response, the Ambrosian hymn, the verse, the canticle from the Gospel, the litany, and it is finished.


The name, ‘Lauds’ comes from the Latin laus meaning ‘praise’ or ‘glory’.    Once the night is over and the sun has risen, the monks come back to church and sing another set of psalms.  We do it right after dawn to celebrate the victory of light over darkness—the rising of the Sun (and the rising of the Son).  Remember that the office of Vigils began with “How many are my foes, O Lord.  How many are rising up against me” (Psalm 3).  But Lauds begins on a completely different note with Psalm 66: “Shout for joy to God, all the earth!  Sing to the glory of his name!” 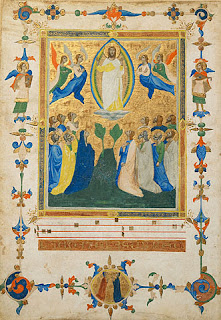 The sun has risen.  The battle against evil is won.


But the Rule of Saint Benedict is no feel-good self-help book.  No “I’m okay.  You’re okay” here.  Sure, Benedict wants his monks to be happy, but he wants real happiness, not the lollipops-and-glitter happiness that you see on TV; because there is no true happiness without penitence.  Until we have a really accurate understanding of our sinfulness, until we recognize the depth of our unworthiness, we can’t possibly appreciate the miracle of our redemption.


And this is where guilt comes in.  Folks are always criticizing Christians for their sense of guilt as though it were something that keeps us repressed and miserable.  But I’m not convinced that guilt is such a bad thing.  After all, if you do something bad, you should feel guilty about it, just as when you see something evil, you should feel angry about it.  Perhaps our parents’ generation spent too much time feeling guilty about stuff, but I don’t think that’s our problem.  We may indeed have problems with low self-esteem (the popularity of reality television suggests as much), but I have to wonder if that’s because we don’t feel guilty enough.  Think about it: why do you feel guilty when you do something bad?  Because you have done something unworthy of yourself.  Get rid of that guilt, and what do you have?  Someone who does something bad and is okay with it because that’s the sort of person he is.[1]


At Lauds (as at Mass), we start off our celebration by first acknowledging our sinfulness and unworthiness—by coming face-to-face with our guilt—only then can we start the party.  Why?  Because we know that all of creation and life itself is a gift.  We doesn’t deserve any of it, and we doesn’t have to earn it either.  So we sings, “Shout for joy to God, all the earth!  Sing to the glory of His name!”


[1] One proviso: There’s a difference between guilt (feeling bad for doing a bad thing) and shame (the self-punishment and self-hatred that comes from obsessing over it).  When you feel guilty, you say to yourself, “I did a bad thing.”  When you feel shame, you say to yourself, “I’m a bad person.”   Guilt is a good thing.  Shame—of the sort I’ve described—is not.
Posted by Fr J Augustine Wetta, OSB at 8:02 AM