On the feasts of the saints and on all solemnities, let the night office be performed as it would be on a Sunday; except that the psalms, the antiphons, and the lessons proper for that day should be said. 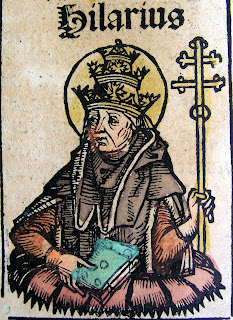 I used to worry that being a monk would be boring.  I was wrong.  In fact, I often wish it were more boring than it is.  Even so, the prayers can feel repetitive at times, so the Church in Her wisdom has arranged the liturgical year in such a way that it is punctuated by feasts, fasts, seasons, and solemnities, all of which are accompanied by special devotions and patterns of prayer.  So a ‘normal’ day in the life of a monk turns out to be rather uncommon.  That’s actually pretty great though, because it keeps us on our toes and focused on what we’re doing, which is, after all, the Work of God.
The important thing to remember is that venerating the saints is a way of celebrating the mystery of Christ’s Body.  It is a way to acknowledge that we are all in this together—we, the living members of the Church, but also the deceased members of the Church together with all those who have made it to Heaven.  Traditionally, we refer to these three groups as the Church Militant (us living folk), the Church Suffering (the folks in Purgatory), and the Church Triumphant (the saints in Heaven).
In this way, we remind ourselves of the consoling truth that we are never alone.   We don’t fight this battle in isolation, nor are we saved in isolation, nor do we enter Heaven in isolation.  In other words, it’s not enough merely “to accept Jesus as my personal Lord and Savior.”  We humans are social beings.  God Himself is a social being.  We need the support of all our brothers and sisters in Christ—the living ones as well as the dead, who intercede for us even now.[1]

[1] Here are some of my favorite, though lesser-known saints:  Saint Hilarius, Saint Mamas, Saint Blathmac, Saint Radbod, Saint Mungo, Saint Olav the Thick, Saint Wigbert, Saint Wilibald, Saints Boris and Geb, Saint Lando, Saint Rudolph, Saint Barfhion, and my all-time favorite, Saint Tron.  You can go with Anthony or Francis, of course, but I like to think that, since these saints don’t have all that many fans, they’ve got more time to spend listening to me…
Posted by Fr J Augustine Wetta, OSB at 12:25 PM