CHAPTER 33: Whether A Monk Ought to Have Anything of His Own 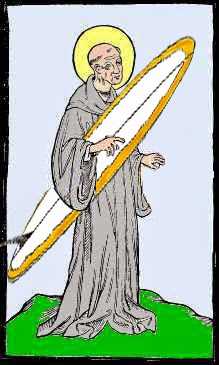 In a monastic community, the vice of personal ownership must be torn out by the very root so that no one may presume to give or receive anything without the permission of the abbot; nor should a monk have anything whatsoever as his own—neither a book, nor a tablet, nor a writing utensil—nothing.  Because monks more so than anyone else, have given up everything they own to God, even their own bodies and their own wills.  If they need something, they should go to the Father of the monastery; and no one should have anything that the abbot has not specifically given him. Let all things be common to all, and let no one call or take to himself anything as his own.

We’ve all heard the expression “Money is the root of all evil.”  But that’s a misquote of Saint Paul’s first letter to Timothy which actually reads, “The love of money is the root of all evil” (6:10).  The difference is crucial because, after all, there is nothing inherently evil about currency.  In fact, without currency, there would be no such thing as civilization.  What Jesus was talking about is that mistaken sense of ownership or entitlement that we have toward the material world—the feeling that says, “I can do anything I want with this because it’s mine.  And while I’m at it, I think I’ll have more.”


Everything God creates is good.  Even things like slugs and mold and glob-fish and proboscis monkeys are beautiful in their own icky sort of way.  It is our attitude that needs changing.  And it has been that way since the Garden of Eden.  If we humans weren’t constantly running around treating the world like we owned it, this earth of ours would be literally perfect.  This is one of the many reasons why monks resolve never to own anything; not because the world is bad but because it is so good.  The monk’s poverty, therefore, frees him not only from undue attachment, greed, and jealousy, but it actually enables him to view the world as a gift, and to enjoy it all the more.


A while back, one of our older monks celebrated the fiftieth anniversary of his solemn vows.  There was a big party, and all the people who love him showed up.  They all brought presents.  After the party, I overheard one of the novices say to him, “Congratulations, Father, but I’m afraid I have nothing to give you for your anniversary.”  To which he responded, “Nothing?  Why, that’s just what I’ve always wanted!”


Remember what Job said when he lost his house, his farm, his servants, his family?  “The Lord gives and the Lord takes away.  Blessed be the Lord” (Job 1:21).  Job could remain happy—even grateful—in the face of catastrophe because he never really saw this stuff as his to begin with.


So here’s an interesting exercise: think of some thing that you really like but you don’t need.


Do you have it pictured in your mind?


Now I want you to give it away.


Can you do that?


Alright, fine.  You don’t really have to give it away.  But how much did it hurt to think about?


Like Saint Augustine said, “It is better to need less than to have more.”
Posted by Fr J Augustine Wetta, OSB at 11:36 AM