CHAPTER 30: How Boys Are to Be Corrected 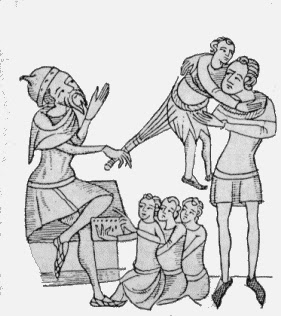 Every age and understanding should have its proper discipline. Whenever, therefore, boys or immature youths (or any who fail to understand the seriousness of excommunication) are guilty of a serious fault, let them undergo strict fasting or be disciplined with corporal punishment, so that they may be healed.


These days, we tend to shy away from corporal punishment, but in the Middle Ages, they beat kids like it was going out of style.  For that matter, they beat everyone: wives, criminals, adulterers, sailors…  There were all sorts of laws about who could beat whom and how many times and what sort of stick they were to use.  (If you don’t believe me, look up the ‘rule of thumb.’)  What is interesting about Saint Benedict’s take on discipline is that he is so careful to limit corporal punishment and focus on its purpose.  Truly, there are some people—kids in particular—who just won’t get it unless you ‘speak their language.’  A bully, for example, may never quite understand the gravity of his sin until he runs into someone who fights back.
Since my monastery runs a school, most of our monks have worked in the classroom at one time or another.  Each, of course, has his own stile of teaching, and some are more lenient than others, but there was one monk who had a particular reputation for strictness.  He had served in the armed forces during World War II, and a rumor spread through the school that he had been in charge of interrogating prisoners of war—a rumor that I’m pretty sure wasn’t true.  While he was lecturing, the kids knew that monkey business[1] would not be tolerated.  As I was walking by his classroom one day, I heard a kid complain, “I thought monks were supposed to be nice.”  To which he answered, “Attilathe Hun ravaged Europe.  He burnt to the ground a huge swath of the continent from Kazakhstan to France.  But he avoided the monasteries.  And that wasn’t because the monks were ‘nice.’”
Truly, Jesus had nothing to say about being nice.  But he had a lot to say aboutbeing good, and that was not exclusive of some very harsh words—and deeds.  Look for ‘hypocrites’ in the New Testament, and you’ll see what I mean.  And when you ask yourself, “What would Jesus do?” remember that freaking out, flipping tables, and whipping people are not necessarily out of the question.[2]  If strictness is what is needed, Saint Benedict is fully prepared to use every option at his disposal.
Benedictines are peaceful creatures, but that doesn’t necessarily make them pacifists.  To be sure, we are the sheep of His flock.  But the flock needs sheepdogs too.