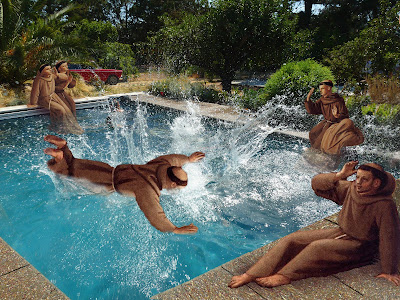 I’d like to close with a quote from Saint John Chrysostom.  He gave a sermon back in 399AD, entitled “No One Can Harm the Man Who Does Not Harm Himself” and he ended it like this:
People today say that the earth is a frightening place.  They say that the world has turned upside down.  That the human race is confused and doomed.  Well I say this is not true.  Because even if a man loses everything at the hands of gossips and miscreants; even if he has been attacked by his own friends, what harm can this do to his virtue?
If you keep in mind that nothing can hurt your soul, then neither loss of money, nor slander, nor gossip, nor banishment, nor disease, nor torture, nor even death can harm you.  And if these things are harmless, how can you be harmed at all?  No, even if all the creatures who inhabit the whole earth and sea teamed up to attack you, they could do you no harm so long as you took refuge in Christ.  Very well, then.  I beseech you, be sober and vigilant in the Lord at all times, and let us endure all painful things joyfully that we may obtain those everlasting and pure blessings in Christ Jesus our Lord, to whom be glory and power, now and ever throughout all ages. Amen.