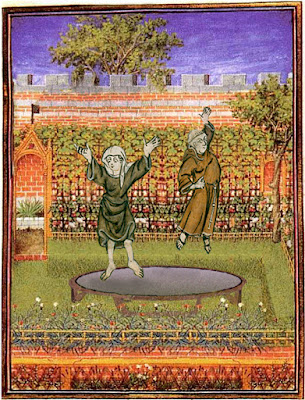 Last Friday, for the first time ever, I watched an episode of Pokemon, the animated television series.  Please God, I will never watch another episode so long as I live.  But I was willing to sit through twenty-two minutes of screechingly dubbed Japanese animation because Pokemon is inexplicably dear to my Seventh-Grade English students.  And I promised them that if they would finish reading The Odyssey with me, I would watch an episode of Pokemon with them.
In short, I was willing to do something I hated, and they were willing to do something they hated in order to share something we each loved.  Frankly, I’m not sure what was accomplished, but it impressed me that my students so cherished a television show that they were willing to endure hours of suffering at the hands of Homer in order to share it with me.  And this, I think, is a clue to the mystery at the heart of today’s gospel: when we find something we love, our first instinct as social creatures is to share it.
“You’ve got to see this movie!” we say.
“You’ve got to read this story!”
“You’ve got to hear this song!”
“You’ve got to!”
Funny, though.  We’re aggressive enough when we’re talking about pop-culture.  Why then are we suddenly so shy when it comes to sharing our faith?
Throughout the history of the Church, countless Christians have suffered for the sake of spreading the gospel, from Saint Paul who was beheaded in Rome, to Saint Jean de Brébeuf, who was boiled, branded, and eviscerated by the Iroquois, to Saint Paul Miki, who was crucified in Japan.  Last year alone, twenty-two Catholic missionaries died for the sake of the gospel.
And yet…as modern, educated citizens of a secular democratic nation, doesn’t the whole concept of evangelization strike us as vaguely…condescending?  Does the message not smack of arrogance—or worse yet, intolerance?  As one popular agnostic polemicist recently wrote, “I [don’t] want to be a missionary or an apostle... I [don’t] want to be an imperialistic colonizing Westerner, bringing the good news to a nation of Godforsaken heathen hordes.”  Well…you put it that way, and all of a sudden I do begin to doubt my so-called “missionary zeal.”
Just this last Friday, a long-time friend mine described his approach to religion as “live and let live” which struck me as rather unimaginative, but now seems strangely appealing.  “Live and let live” means that no one has to be wrong.
Still, I don’t quite see the sense in going to church on Sunday if that’s all your faith adds up to.  I believe in letting people live, of course.  But is it fair or loving to let someone live in ignorance or darkness or illness or cruelty?  And it makes even less sense when you think of Jesus Himself who said, “Go out and make disciples of all the nations.”  And to be sure, he practiced what he preached.  “Let us go on to the nearby villages,” he told Simon this morning, “that I may preach there also. For this very purpose have I come.”  Jesus seemed to think his message was worth spreading—that people weren’t really living till they heard it…and if we are to be followers of Jesus, then we are obliged to help him spread it—to live and help live.
“An obligation has been imposed on me,” wrote Saint Paul, “and woe to me if I do not preach it!”  Or in the daunting words of Saint John Chrysostom, “There is nothing colder than a Christian who has no concern for the salvation of others.”
So we have a most solemn obligation spread the Good News.  “Everyone is searching for you,” said Saint Simon to Jesus.
Everyone.
The World hungers and thirsts for him.  And the fantastically good news—good with a capitol “G”—is that Jesus is searching for them too.
“The Church exists for nothing else but to draw men into Christ, to make them little Christs,” wrote C.S.Lewis, and “if we are not doing that, then all the cathedrals, clergy, missions, sermons, even the Bible itself, is simply a waste of time. God became Man for no other purpose.”
Everyone is looking for Him.   Whether they know it or not, they’re looking for him.  So…to the weak let us become weak, to win over the weak.  Let us become all things to all, to save at least some.  All this let us do for the sake of the gospel, so that we too may have a share in it.

In the name of the Father…