CHAPTER 61: How Other Monks Should be Received

If a monk from another monastery comes to visit and is satisfied with the customs he finds here, and does not trouble the monastery with excessive demands, let him be received for as long as he likes. Furthermore, if he has advice about how things might be done differently (and he makes his complaint with humility and charity) let the abbot consider carefully whether the Lord did not perhaps send him for that very purpose.

If a visiting monk has some criticism to offer, the abbot should take it seriously.  But this can’t be easy.  No one likes to be told how to run his own house.  Still, a fresh pair of eyes might notice something that the abbot and his community have missed.  Ironically, one of the universal truths of human existence is that “birds of a feather flock together.”  It’s much easier to listen to people we agree with, so we favor the company of people who think like we do.  But this makes it difficult to have a balance opinion.  If we were truly open to new ideas and anxious to broaden our horizons, we’d seek out people we don’t agree with, and hang out with them instead. 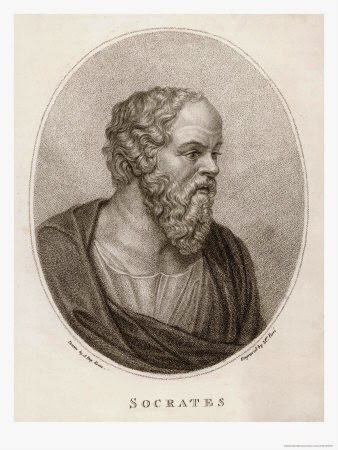 In the fifth century, BC, there was guy who actually lived this way.  His name was Socrates.  He used to spend his days walking around Athens seeking out (and questioning) people he didn’t like.  He’d spend all day grilling them until he found a hole in their arguments.
Socrates was a brilliant, charismatic, and honest man.  But he did this all day every day, and pretty soon the Athenians had him killed.  After all, no one can handle that kind of interrogation on a regular basis.  It’s just too annoying.  But before he died, Socrates had time to teach his method of argumentation to a few young disciples, and they passed it on to others, and eventually, it became known as “The Socratic Method.”  It’s a really great way to argue, especially if you have the patience and charity to really listen.
It works like this:
Before you start arguing with someone, let them know that you are interested in their opinion.  This is harder than it sounds, especially if they’re wrong and you know it.  But understand that they will be much more interested in hearing your opinion if they think you understand theirs.
Next, repeat what they have to say.  Repeat their own words back to them so that they know you are really listening.  This is important for you too.  Maybe you have been hearing something that they didn’t intend.  Maybe you’ve been reading too much into their argument.
Lastly, ask questions.  Lots of questions.  Anywhere that you see a contradiction or an omission, instead of pointing it out, ask a question about it.  If there’s a point you’d like to make, keep asking questions until they make the point for you.
I’ll give an example.  I once had an encounter with a Fundamentalist who told me I was sinning because, as a priest, I allowed people to call me “Father.”  At first, this annoyed me.  After all, I hadn’t asked this guy for his advice.  But instead of explaining the title to him, I took a deep breath and said, “So you say that I am sinning whenever I allow someone to use that title?”
“Yes,” he answered, “because Jesus said, ‘Call no man Father.’”
“Well, you’re right there,” I said, “That’s straight out of the Gospel of Matthew:  “Call no man ‘father.’  There is but one Father in heaven” (23:9).  But I’m a little confused.  What if a child wants to address his…um…male genetic predecessor.  Does he have to find another word?”
“That’s different,” he said.
“How?” I asked.
“Jesus was only referring to spiritual fatherhood, not genetic fatherhood.”
“But I thought he said to call no man “Father.”  Are you telling me that he meant only the men who didn’t have actual children of their own?  What about adopted children?  ”
The conversation went on a good while longer, but you get my point.  Instead of just telling him he was wrong, I explored his claim with him until he finally admitted that there were exceptions and that the passage couldn’t be taken literally.  I don’t think he changed his mind, but I think I learned something about his opinion, and he came a step closer to understanding mine.
The Socratic Method is very Benedictine because it revolves around listening.  It also requires a great deal of humility because, no matter how stupid, arrogant, or wrong-headed your adversary may be, you have to be willing to let him teach you.  After all, as Saint Benedict points out, it may be the case that “The Lord has sent him for this very purpose.”
Posted by Fr J Augustine Wetta, OSB at 7:17 PM