CHAPTER 59: Rich Children and Poor Children Who Come to the Monastery 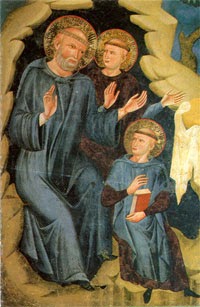 Whenever a rich family offers their son to God in the monastery, let his parents write out the promise which we have mentioned above; and with the offering, let them wrap that document and the boy's hand in the altar cloth and so entrust him to the community.
As for their property, let them bind themselves under oath in the same document that they will never try to give him things nor pass things along to him through other persons; nor, for that matter, leave him any opportunity to inherit anything.  If, therefore, they wish to make a donation to the monastery, they may do so, but as alms for their own benefit, because we do not want the boy to grow up with the sort of uncertainty that might deceive and ruin him.  God forbid!  This is something we have learned from experience.
Let those who are poor do the same. But as for those who have nothing at all, let them simply make the declaration, and with the document, offer their son in the presence of witnesses.

In the old days (and again, by ‘old’ I mean medieval), people used to drop off their extra kids at the monastery and let the monks raise them.  Different kids might come to the monastery for different reasons.  One might come from a poor family who couldn’t take care of him.  Another might be an orphan.  In another case, a father or mother might feel that they owed a great debt to God and that this was a way of giving something back to His Church—like Anna did in the Old Testament.  She prayed for a child, and when God gave her one, she vowed that she would give him over to the temple in thanksgiving.  The boy grew up to be the prophet, Samuel.  Elizabeth, the mother of John the Baptist, did the same thing. But whichever the case, such children would grow up as part of the monastic community.  They would pray with the monks, learn a trade, learn to read, and perhaps make their own vows some day.1
Regardless of how they came to the monastery, though—who their parents were or how much money they had—each boy would enter the community on the same terms.  Rich families would bring a gift (like money or land) presumably to pay for the child’s upbringing, but that didn’t mean he would be treated differently from the others.  Rich or poor, every monk stood on equal ground.  This was, in effect, the first communist society—and the only one to last more than fifty years.
More importantly, however, Saint Benedict wanted to be sure to avoid favoritism—either in the form of pampering for the rich, or neglect of the poor.  He didn’t want his youngest monks to grow up restless and dissatisfied, wondering at every turn whether or not this was really the right place.  If he came to another conclusion on his own, so be it, but the constant temptation to run away would be too much for any child if he knew there was a fortune waiting for him on the outside.
Frankly, that would be a tremendous temptation to anyone, and we can see today how rough it is to enter into a commitment when the alternatives are so ready.  We live in a culture of infinite options and instant gratification; so the moment we get bored or lonely or frustrated, we are encouraged to move on.  We grow up thinking we have a right to be happy—which we don’t, of course.  We have a right to the pursuit of happiness.
Of course, I’m not saying that it’s wrong to follow your dreams or to be ambitious.  Nor do I mean to imply that you must always be satisfied with the status quo.  But be careful that you don’t waste your life away constantly second-guessing your decisions, wondering if someone else’s life is better, daydreaming about all the other things you might be doing if you weren’t here now.
This is what monks call “interior grumbling.”  It is a terrible disease, with the potential to eat your life away.  But there is one great antidote: gratitude.  We must be constantly thanking God for the gifts we do have in addition to asking him for the things we need.  If we take time to appreciate the abundant graces in our lives, it will result in what spiritual writers call “living in the present moment.”  And this is always accompanied by the virtue of perseverance.
There is a great prayer that sums up this whole philosophy.  Saint Augustine wrote it: “Lord, give what you command, then…command whatever you please.”

1 At my monastery, people drop their kids off all the time, but they take them back at the end of the day, thank God.