CHAPTER 54: Whether a Monk Should Accept Gifts

Unless the abbot gives his explicit permission, a monk should never receive letters, tokens, or gifts of any kind, either from parents or any other person.  If his family sends him something, let the monk not presume to accept it before it has been approved by the abbot. 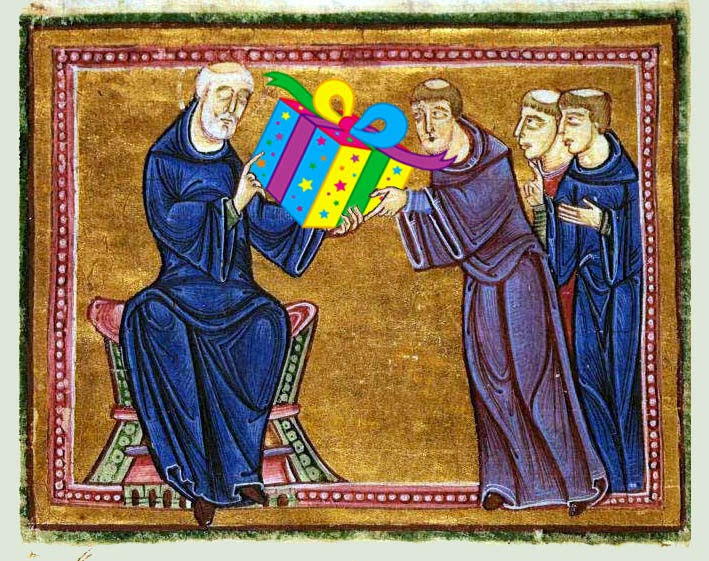 A monk should love the world, but should not be attached to it.  He should be grateful for God’s gifts, but not cling to them.  We call this “detachment,” and it is a necessary virtue for the monk precisely because he gives up everything to be with Jesus.  But detachment isn’t just a concern for monks.  All Christians should live with the understanding that the beauty of the material world is God’s gift, and enjoy it as such—but not be too stressed out when it seems to slip away.


Not too long ago, I lost my keys.  Truth be told, I lose my keys pretty often.  I leave them hanging from keyholes, wedged between sofa cushions, sitting in drawers and abandoned in coat pockets…  I once found my keys on the butter shelf in the refrigerator.  This time was different, though, because I’d been in the kitchen when I lost them, and I distinctly remembered taking them out of my left pocket to open the pantry.  One monk had passed through during the time I was there.  He had spoken to me briefly while I was opening the door and lingered a while in the pantry with me.  “Don’t lose you’re your keys,” he’d said to me with a wink before he left, and a few moments later, I realized they were gone.  Now, this particular monk has a fondness for practical jokes, so I had a strong suspicion they could be found on his person.


I can’t say I was amused.  My life is messy enough without having other people come in and mess it up for me.  So I marched off to find him.  He was in the calefactory reading.  “Where are my keys?” I said, a fist planted on each hip.


“Excuse me?” he answered, smiling over his book.


The smile broadened, and he shook his head.  I could tell from the look on his face that he knew exactly where my keys were.  At the same time, I also realized that yelling at him would accomplish nothing.  So I sighed and shook my head and sat down in a chair across from him.  “Please, Brother, if you know where my keys are, just tell me.”


“Brother,” he said, “they’re hanging out of your left pocket.”


I looked down, and there they were, caught on a thread, swinging from my hip.


Little disciplines like asking permission from the abbot help to remind the monk that no material possession—not even a set of keys—is worth disturbing your peace of mind.  You may not have an abbot or a superior to go to, but in general, there’s always someone standing between you and what you want.  Try to think of that person as a gift—a reminder from God—to focus on what’s really important.
Posted by Fr J Augustine Wetta, OSB at 2:11 PM