Shouts and Threats and Blows 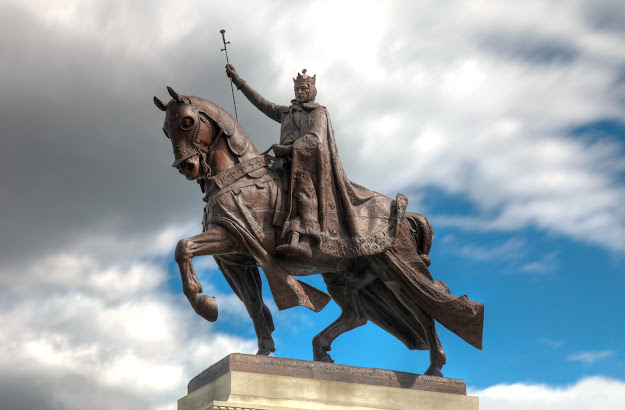 Saint Louis has been in the news again.   We were told repeatedly that protesters “clashed” over the removal of the statue of our patron saint.  If you were following the news, you saw photographs of people shouting at one another.  Exchanging threats.  Exchanging blows.

I wasn’t there on Saturday when those things were photographed.  But I was there every evening for the rest of the week to say a rosary with about a hundred or so Catholics.  Initially, I went there to support those who were praying at the statue.  But I returned night after night because of the conversations I had on the way back to my car afterward—not with fellow Catholics, but with people who seemed to disagree with what I was doing.

On Tuesday, as I was returning to my car, I was stopped by a man who asked me, “Would you mind having a civil discussion about that statue?”

How can you turn down a request like that?  Why would you want to?  “I wouldn’t mind a bit,” I said.  “I’m not entirely sure where I stand on Louis IX as a person, because I just don’t know that much about him.  But I do get very nervous when folks start destroying artwork, and I also figure that anger needs to be met with prayer.  What do you think about the statue?”

“I’m Jewish,” he said, “and I want it taken down.  That king of yours was responsible for genocide against Jews.  You wouldn’t approve of a statue of Hitler, would you?”

He paused in thought for a moment.  “Honestly, I don’t know,” he said. “A friend told me that, and I just believed him.”

His candor was so disarming, I started defending his position.  “Well, you can’t research every detail of everything you’re told,” I answered, “but if you trust the guy who told you that, then I’ll go home tonight and look into this—I mean really look into it, not just find Catholic sources that I already agree with—and if it turns out that your friend had his facts straight, then…well…I’ll come back and help take it down myself.”

I talked with David for about half an hour and we couldn’t seem to find anything else that we disagreed on.  “It’s my birthday,” he said as we parted ways.

“Happy birthday,” I said.   He smiled again, and that’s the last I saw of him.

The next evening, as we were praying, I noticed two African-American women standing at a distance, watching us.  I don’t think they were there to protest, but one of them looked angry.  Or maybe she was just uncomfortable.  It was hard to tell.  I didn’t quite know what to say as I walked past, so I just nodded and said, quietly, “You know, black lives really do matter.”

Suddenly, she didn’t look angry so much as very, very sad.  She looked like she might be on the verge of tears.  “Thank you,” she said, “And you know, all lives really do matter.”

And then, somehow, we were smiling at one another.  She introduced herself as Janet.  “I’d hug you,” she said, “but…you know…the whole Caronavirus thing.”

“I’ll take prayers instead,” I said.

I had conversations like this every night, and not once did we come to blows.  No one threatened me.  I talked with an African-American man and his daughter, I talked with another Jewish man, and I talked with two gay joggers (I’m assuming they were gay because one of them wore a t-shirt that said, “I’m gay” on it).  And in every case, we parted friends.  Not just friendly, mind you, but friends.

Now…for the record, Saint Louis did have copies of the Talmud collected and burned.  He did expel Jews from France.*  As a twenty-first-century Catholic, I am not proud of that.  The Jewish people are, in the words of Pope Benedict XVI, “our fathers in faith”.   So it’s hard to imagine a saint doing such a thing.  And Saint Louis did lead two crusades against Muslim armies in the East.  If he did those things today, I’d agree that he was, as his critics suggest, antisemitic and Islamophobic.

But, given that Europe had been at war with the Saracens for six hundred years, I think he can be excused for fearing them.  They were serious warriors.  And perhaps we can find fault with Saint Louis for not establishing freedom of religion in thirteenth century France; but there was no freedom of religion anywhere in the world until the founding of Rhode Island.  So I’m not sure he could have known better.  Still, for the sake of my friend, David, I’ll keep reading.  I hope he is somewhere, reading up on Saint Louis as well. 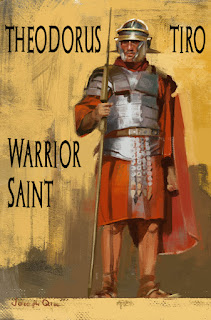 A few months agao, I was giving a retreat in Bremerton, Washington, and a big fellow with a handlebar mustache and tattoos all up and down his arms came up to me after my sermon and told me about Saint Theodorus “Tiro”—the patron saint of interreligious dialogue (or so he said).  Theodorus joined the Roman army in 304 AD, and had no sooner taken a uniform than his cohort was ambushed.  Theodorus, apparently, was so brutal, so vicious, such an excellent warrior, that his fellow soldiers started referring to him as “the recruit.” (tiro in Latin).  Anyhow, after several years of this, he discovered Christianity and converted.  The problem was that Roman soldiers—indeed all Roman citizens—were required to offer sacrifices at the local temple.  Theodorus refused.  “That’s alright,” his buddies said, “Just walk past the temple, and we’ll assume you made the sacrifice.”  **Wink. Wink.**.

Well, Theodorus walked out to the temple of Cybele, alright.  And while he was there, he burned it to the ground.  Now, the interesting thing about his story is that his buddies seemed genuinely sorry to have to execute him, and he seemed genuinely okay with them doing it.  In so many words, his fellow soldiers apologized for having to do their job, and Theodorus understood that they were in a bit of a pinch and forgave them.  “So,” says my friend with the tattoos, “he became the first true ecumenist.”

Now, I can’t find any evidence that the Church sees Theodorus Tiro as a shining example of Christian ecumenism, but I do see my friend’s point: truth is truth, and there’s just no compromising on that.  But for those who love the truth, even a really serious disagreement can end in friendship.

“I give praise to you, Father, Lord of heaven and earth, for although you have hidden these things from the wise and the learned you have revealed them to little ones. No one knows the Son except the Father, and no one knows the Father except the Son and anyone to whom the Son wishes to reveal him.”

Let us pray that, by the grace of God, every living human being will come to know the Son of God.  But until that time comes, let us pray for the humility to remain among his little ones.

*Upon further research, it appears that Louis IX never did expel Jews from France.  And the burning of the Talmud may have been the result of a mistranslation which characterized Jesus as condemned to Hell and boiled in excrement.