Do not give way to anger.
Do not cultivate a desire for revenge.
Do not return evil for evil (cf 1 Thes 5:15; 1 Pt 3:9).
Do not no injury, yea, even patiently to bear the injury done us.
Love your enemies (cf Mt 5:44; Lk 6:27).
Do not curse those who curse us, but rather bless them.
Bear persecution for the sake of justice (cf Mt 5:10)
--The Holy Rule of Saint Benedict,  Chapter 4: The Instruments of Good Works

A few weeks ago, I was out of town giving a day of recollection to a group of confirmation students.  Some nuns had invited me. It’s part of their apostolate to host retreats and that sort of thing.  I didn’t know the kids, and they didn’t know me, but something felt a little off. I mean, the kids were super nice—very quiet and patient, and respectful—but there was something about them that I couldn’t quite figure out.  And it wasn’t until pretty recently that I realized what was the matter.  It was this: the kids were exhausted. They were 12, 13, 14 years old, and they were worn out, drained, war-weary.  And so were the nuns.  Every one of them had that strung-out, strained, up-all-night look about them.  It made me uneasy. 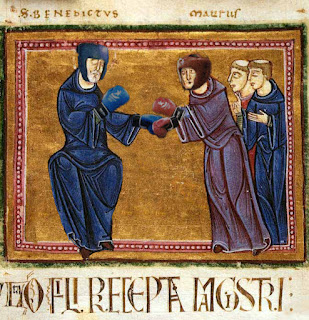 [1] I don’t know the context of this quote, and I’m glad I don’t because I prefer not to be in the position of having to defend Matt Damon’s star’s behavior.
[2]  “We’re surrounded?” Colonel Lewis ‘Chesty’ Puller supposedly said, “Good.  That simplifies the problem.”  And when asked if they were retreating, replied, “Retreat, hell. We’re attacking in a different direction.”
Posted by Fr J Augustine Wetta, OSB at 7:22 AM