When I was in college, I took a friend with me to mass one Sunday morning, and when we entered the church, he took one look at the crucifix and groaned “Awe, man.  It is too early in the morning for that.”  Which insulted me at first, until I realized that, without faith, all one sees in a crucifix is a man being tortured to death.  But Christians spend their lives meditating on the holy cross…because it isn’t just an instrument of torture.  If it were merely that, then we the followers of Christ would truly be the most miserable of all creatures.  No, the cross is not merely the tree upon which our savior died.  Through the lens of the resurrection, we perceive that the cross itself, the crown of thorns, the whips and scourges and nails are Christ’s trophies of victory.  In his resurrection, Jesus has become the Lord of the Kingdom of the Living, and has revealed himself as the Author of Life—the center, cornerstone, alpha and omega of God’s new plan for humanity.  And so we sing Alleluia, which means “Praise God!” or, if you prefer to sound more evangelical, “Praise the Lord!”

Early in the 5th Century, Saint John Chrysostom delivered a sermon on Easter Sunday.  So wonderful was this sermon, that, in the Eastern Catholic Church, it has been read every year for the last sixteen hundred years on Easter Sunday at the start of the Divine Liturgy.

If there are any pious people here today who love God, let them enjoy this splendid and radiant Feast. If any of them have been wise servants, let them blissfully enter into the joy of their Lord. If any of them have worked hard at fasting, let them now receive their reward. If any have toiled from the very first hour, let them now receive their just wage.
But if any people showed up late for this feast.  If anyone came at the third hour…well…let them join in the Feast.  In fact, if anyone waited until the sixth hour…they should not be afraid, for they will not be deprived of anything. But…if any of them procrastinated and dallied until the eleventh hour, they shouldn’t worry. For the Master loves to grant honors and will receive the last just as the first. He gives rest to the one who came at the eleventh hour, just as He does to the one who toiled from the first.  To the one He gives; on the other, He showers gifts. He accepts good works, but he also accepts good intentions. He honors labors and praises resolutions.
And so, let everyone enter into the joy of their Lord, and let the first as well as the last receive the reward. Let the rich and the poor celebrate together. Let the hard workers and the lazy workers honor this Day.  Let those who fasted rejoice on this day…and those who did not fast…oh, let them rejoice too. The Table is overflowing with food; let all be satisfied. The Calf is fattened; let no one go away hungry. Let everyone enjoy the Cup of Faith. Let everyone receive the richness of Grace. Let none grieve at their poverty, for the Kingdom that belongs to all people has been revealed. Let none weep for their sins, for forgiveness shines forth from the Tomb. Let no one fear Death, for the Savior's death has set us free.
The One Whom Death imprisoned has extinguished Death. The One Who descended into Hell made Hell his prisoner.  He caused it anguish when it tasted His Flesh. When Isaiah foresaw this, he exclaimed: "Hell was all distressed by encountering You in the underworld." It was distressed because it was abolished. It was distressed because it was mocked. It was distressed because it was slain. It was distressed because it was overthrown. It was distressed because it was chained. It seized a Body but discovered…God! It grabbed hold of the Earthly but encountered…the Heavenly! It seized the Visible but was conquered by the Invisible. O Death, where is your sting? O Hell, where is your victory? Christ is risen, and you are abolished! Christ is risen, and the demons are cast down! Christ is risen, and the angels rejoice! Christ is risen, and Life now reigns! Christ is risen, and the Tomb is emptied of the dead! For in rising from the dead, Christ became the First-Fruits of those who have fallen asleep. To Him be glory and power for ever and ever! Amen. Alleluia! 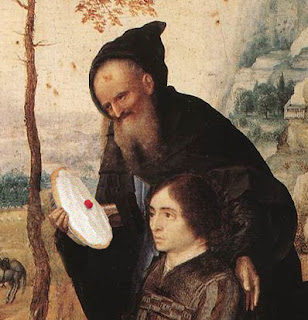