Why wait? It's Advent!

Here is a brief poetic meditation written by an early-twentieth century Greek novelist named Nikos Kazantzakis.  In this meditation, the author imagines a young man standing on a mountain overlooking Nazareth.  It’s the middle of the night.  It’s some time within the opening years of the first century A.D.  He describes what the young man sees:

Little by little your eyes became accustomed to the darkness and you were able to distinguish a stern straight-trunked cypress darker than night itself, a clump of date palms grouped like a fountain and, rustling in the wind, sparsely leafed olive trees which shone silver in the blackness. And there on a green spot of land you saw wretched cottages thrown down now in groups, now singly, constructed of night, mud and brick, and smeared all over with whitewash. You realized from the smell and filth that human forms, some covered with white sheets, others uncovered, were sleeping on the rooftops.
The silence had fled. The blissful uninhabited night filled with anguish. Human hands and feet twisted and turned, unable to find repose. Human hearts sighed. Despairing, obstinate cries from hundreds of mouths fought in this mute God-trodden chaos to unite, toiled to find expression for what they longed to say. But they could not, and the cries scattered and were lost in disjointed ravings.
Suddenly there was a shrill, heart-rending scream from the highest rooftop, in the center of the village. A human breast was tearing itself in two: “God of Israel, God of Israel, Adonai, how long?” It was not a man; it was the whole village dreaming and shouting together, the whole soil of Israel with the bones of its dead and the roots of its trees, the soil of Israel in labor, unable to give birth, and screaming.”

The young man, you find out eventually, is Christ himself—a teenager still, not yet ready to begin his ministry, but acutely, painfully sensitive to the longing and suffering of his people.  The God of Israel is there among them—but they don’t know it yet.
I’ve always liked this image, and for a long time, I used to keep it on my nightstand next to my bed.  I like it because it gives me a sense of the longing I should feel during this time of Advent—indeed, the longing I should feel my whole life.  And so too there’s something so poignant about that image of these people—these suffering people—groaning and crying and waiting—and not realizing that they’re redeemer is already there.
This is the way God chooses to come to us.  The birth of the Messiah is THE KEY EVENT IN ALL HUMAN HISTORY, and yet God wanted it to take place “so quietly that the world went about its business as if nothing had happened.”  A few shepherds noticed.  Those few magi noticed.  Herod noticed.  And then, apparently, the whole thing was forgotten.  For a time.
In the end, therefore, waiting is not necessarily a BAD thing.  "I would like to beg you, dear Sir," writes Rilke in a famous passage from his "Letters to a Young Poet"  "...to have patience with everything unresolved in your heart and to try to love the questions themselves as if they were locked rooms or books written in a very foreign language. Don't search for the answers, which could not be given to you now, because you would not be able to live them. And the point is, to live everything. Live the questions now. Perhaps then, someday far in the future, you will gradually, without even noticing it, live your way into the answer.  John Keats wrote of “Negative Capability,” that is “when man is capable of being in uncertainties. Mysteries, doubts, without any irritable reaching after fact and reason.”  ADVENT is the season when we learn to LOVE THE QUESTION.  Where we learn to love the waiting.
So you see, there’s this simultaneous sense of urgency—that we need to answer God’s call and that we need him to answer our call—and soon.  “Answer me, Lord, when I call to you,” the psalmist says.  “Answer me, when I call to you”…there’s something so brazen about it that it’s charming.  There’s an urgency in the psalms.  But there is also this sense that we must learn to be patient, and wait—wait in joyful hope—find God’s answer in the waiting.
In the monastery, we have an Advent tradition that goes back all the way to the fifth century—and probably earlier.  For seven days preceding Christmas, we sing a set of antiphons—short chants that precede the Magnificat at Vespers.  And we call these, “The Great O Antiphons.”  Seven meditations on the seven titles of our savior.  Each night we sing one more:  “O Wisdom….O Adonai…O Root of Jesse…O Key of David…O Rising Sun…O King…O Emmanuel.”  “O come!” we sing each night.  “Come and teach us, come and free us, come and deliver us…”  Each night, the chant shifts in emphasis, builds in urgency, until on the last night, December 23, we sing “O Emmanuel, you are our king and judge, the One whom the peoples await and their Savior. O come and save us, Lord, our God.”  And the O is drawn out…like a cry.  It has an almost Eastern ring to it.
And here's the coolest part: the first letter of each title read backwards spells  out “ero cras”—“Tomorrow, I come. 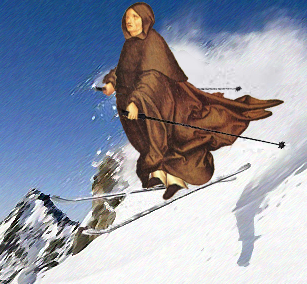