CHAPTER 22: How the Monks Are to Sleep 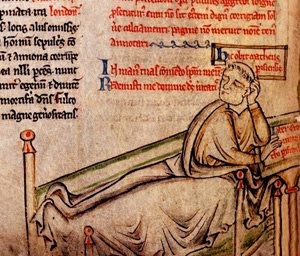 Each monk should have a bed of his own, and should sleep fully clothed.  However, he should not where his knife to bed lest he roll over and stab himself in his sleep.
In this way, the monks will be ready to rise each morning as soon as the signal is given. Then let them hasten to the Work of God, each striving to outdo the rest in fervor—but with seriousness and civility.  The younger brethren should not have their beds next to each other, but intermingled with the older ones; and rising for the Work of God, let them gently encourage one another, because sleepy monks like to make excuses.

Where did this chapter come from?  We just had just had twenty chapters on holiness…now sleeping arrangements?  The next chapter is on excommunication, so I have to wonder what was going through Benedict’s mind when he suddenly decided to insert a chapter on sleeping.  And what’s the deal with the knives?  Is Benedict just writing down whatever happens to pop into his head?
Or is there something else going on here?
Look closely at what he has to say.  Look at how he has the monks “always ready” to do spiritual battle.  Notice the very military feel of this chapter.  Notice that the job of the deans appears to be that of keeping the young monks from getting rowdy at night.  Now it begins to pull together, doesn’t it?  Prayer is serious business, and Benedict wants his monks to take it seriously.  If you’re up all night messing around, you’re going to be very little use at prayer the next morning—if you show up at all.  And just because you can’t see the enemy doesn’t mean he isn’t there.  It’s no good having our soldiers fall asleep when they are on duty.  And frankly, that goes for any good Christian.  I am of the opinion that 50% of a healthy spiritual life is simply getting to bed on time.
But now a word about the knives.  I’m proud to say that the Order of Saint Benedict is the only religious order that has a stipulation in its rule regarding how we are to handle our weapons.  I never get tired of this rule, though I’ve had few occasions to obey it.  Still, when my students complain that I am too strict (“I thought monks were supposed to be nice!” they say), I remind them to read Chapter 20, and point out that Attila the Hun ravaged Europe—but avoided the monasteries whenever possible.   And it wasn’t because Attila liked monks.  I just have to assume that when it came time to attack the walled enclosure full of celibate men armed with knives and nothing to lose…he decided just to skip the monastery and attack another village instead.  Besides that, Jesus never told us to be nice.  He told us to be good.  There’s a difference.
Posted by Fr J Augustine Wetta, OSB at 8:07 PM